A grassy field outside a Czech Republic village is sacred ground to geocacher Steve Christensen (“Coach Steve“).  The field remains nearly unchanged since an American bomber, carrying a crew of young airmen, crashed here in 1945. Coach Steve’s father piloted the plane. The B-17 was shot from the sky during the final months of World War II. Lt. Donald Christensen was killed in action, along with all but one of his crew.

Coach Steve was born four months after the crash. He never met his father. His journey to discover his father’s story, visit the crash site and meet the local Czech people who call his father a hero took decades. It also took a little help from Czech geocachers.

Steve grew up knowing little about his dad. He says, “Our mother remarried when I was four and because of the hurt of losing her first husband in the war, and not wanting to inject the old memories into a new relationship, I was never told much. Only that he was a pilot and was killed in the war. He was declared missing in action on March 2, 1945. That’s my mother’s birthday, and I was born on June 12.  I never knew my father, except by photos and what I have learned on my own and with some help from my brother.”

Steve and his brother began to research their father over the internet in 2004. Steve says, “We found the 398th bomb group memorial site and found the mission he was on when he died and some very short eyewitness reports from other pilots… The first picture that came up was a picture of the crash with some German soldiers standing by it.  We could see a power line in the background and made note of that location in case we ever got there. The next picture that came up was of the memorial [to his father’s B-17 crew] in a little town called Slany. We were floored. We knew nothing about it.”

Both Steve and his brother traveled to Slany months after the discovery. But last year Steve was tempted to return to the Czech Republic. He would discover more than ever before, including remnants from the crash site. He says, “This last year was a big celebration at the memorial and an air show.”

The puzzle cache was hidden in 2009 by geocachers Pavel and Renka. Their geocaching username is TwiceRaP. Pavel is a retired Czech military officer. He says he created the cache to pay tribute to the sacrifices of military personnel and their families. The site of the crash is not far from his home.

Pavel writes, “The whole family knows how hard the military life is and what it can bring along. Therefore we were very touched by the story of the American bomber crew that had happened close to our home. Even then it was very strong for us and close to our hearts.” 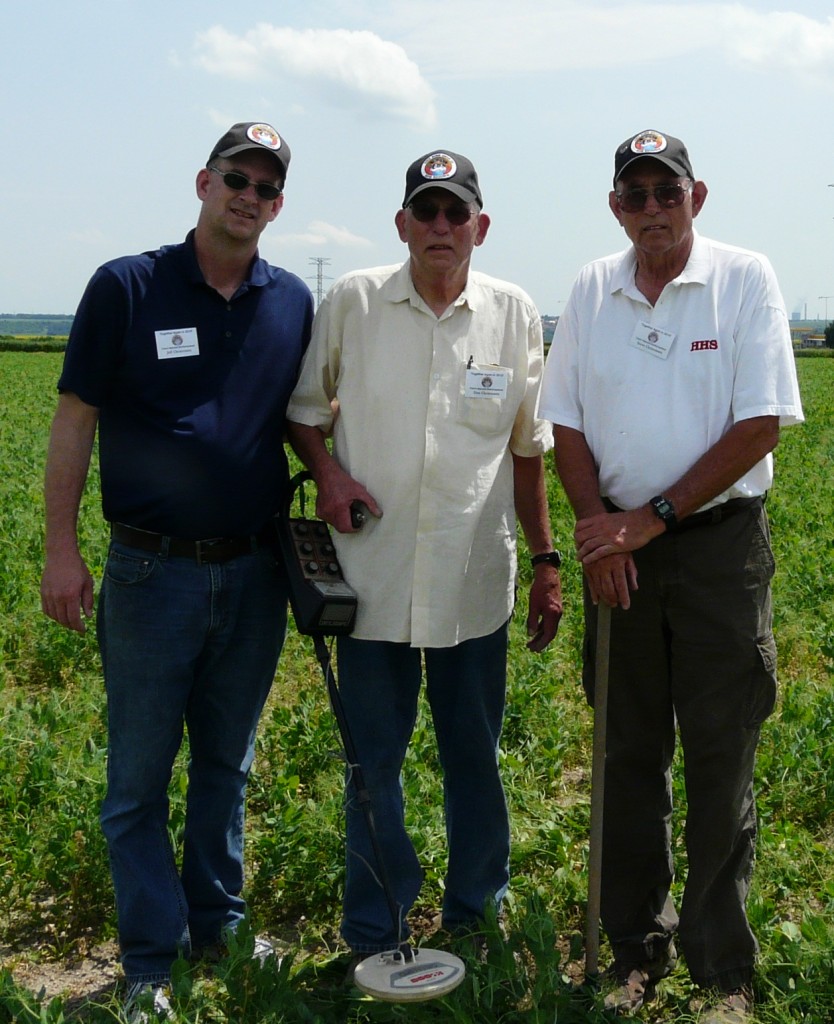 Soon after creating the geocache, Pavel received an email from Coach Steve. Steve asked about the location and the geocache dedicated to the downed B-17. An email exchange started between the two men, who never met, didn’t share the same native language but did share geocaching. Pavel and Steve exchanged several more emails.

Not long after, Steve arrived for the memorial service in the Czech Republic. To his surprise, a retired Czech military officer in full-dress uniform and his wife stood waiting for him. It was Pavel and Renko.

Steve says, “That is were I met TwiceRap, two very nice people who had put a cache at the memorial.  He was there in uniform and she is just a stunningly beautiful woman.  They were very kind to me, and helped me find the cache.  I doubt I could have found it on my own because it was a mystery cache written in Czech.  We had emailed back and forth, but I had no idea they were going to be there in person.”

The coordinates from TwiceRap’s cache brought Coach Steve nearly on top of the crash site. More than 60 years after the B-17 went down, Steve found a tangible connection to his father. He says, “One of our Czech friends took us out in the field where we thought the crash site was (the power line that showed up in the original photo is  still there) and we started to cast around with the metal detector.  Then I remembered the coords from TwiceRap’s cache and it took us to where we started to find small parts of the wreckage after 65 years.  We got a whole bag full of pieces.  Pretty exciting.”

Pavel says he never expected their geocache would help connect a son to his fallen father. Pavel writes, “A thread leading through all this began on the fatal day of March 2, 1945, continued with the team TwiceRaP and ended up with the living geocacher Coach Steve, living in U.S.A., who found our cache about his own father.”

Pavel wrote a blog post in his native Czech language about placing the cache and meeting Steve titled, “Not All Who Wander are Lost…” The post, translated in English, begins, “If it was not for geocaching, I would have never been able to tell you this story.”

Steve had brought his nephew along to witness the occasion. Pavel met them both. He says, “Meeting with Steve has multiplied everything even more. Me and my wife were very proud that we had created this cache, that Steve contacted us from the U.S.A., that he came and that we could participate together in the ceremony, where we honored the fallen bomber crew in the presence of the son and grandson of the pilot. It is hard to describe these moments, but geocaching contributed to this meeting that has remained engraved in our hearts. Steve became the most important guest of both the memorial and the following air show.”

Steve’s been back in the United States awhile now. But the memory of the trip hasn’t faded, “I tell the story to any of my family who will listen. Some of my kids and grand kids show some interest, but I think it will mean more later.”

Now after a lifetime without his father, when asked if he’s ever met him Steve says, “Only in my head and in my dreams. Since all the research we have done, I feel like I know him.”

Follow Us
⁣ Finding this cache will definitely make you a

⁣ Here’s a cache that will make you sweat, but

⁣ This week we’re going back to September 2015

Sometimes the search seems infinite and the confus

This cache is so di-vine it’s ivy league. Image