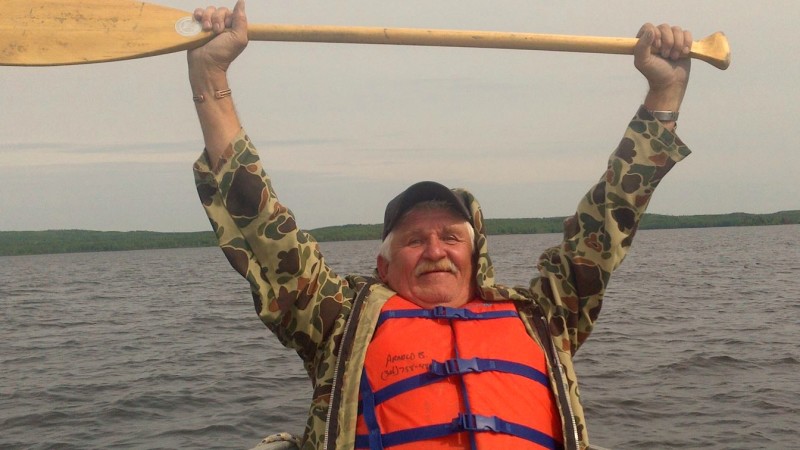 Remember that time we wrote about an FTF after 12 years? Maybe we weren’t being specific enough. That was a FTF after 4,337 days.

Geocachers are born to break records, to test limits, to push boundaries. So when four guys set out in a boat on a journey to an obscure island to find a geocache with impossible odds, we were excited, enthralled, even impressed. But we were not surprised. No, never surprised. The need to seek adventure is in a geocacher’s very DNA.

SK Extreme 01 is a virtual geocache on an uninhabited and unnamed island in Brabant Lake, in northern Saskatchewan. Note that Saskatchewan is just about twice the size of Germany—making the island a needle in a big Canadian haystack.

The geocache was published on Geocaching.com in 2002 by geocacher KenJamin, who was staying on the island during a guided canoeing trip. He found a topographical survey benchmark and, realizing that Canadian benchmarks weren’t published online like American benchmarks, thought it would make a good virtual cache.That’s the type of geocache for which one gathers information at a site, rather than finding a physical hidden container.

KenJamin says the virtual would be the start of a series of extreme geocaches. “The kind of caches that drew me to geocaching in the first place.”

Team BOSS, a group of geocachers consisting of bennykidd, olemaz, scratch1, and sasktravelbugs, planned a trip. Snow and ice would force them to delay their adventure until spring. Their journey would begin with a drive from Saskatoon to Brabant Lake, a route so long and remote even Google Maps doesn’t dare plot it. And they knew the drive itself wouldn’t be a picnic. Says Olemaz, “We had heavy rains in Southern/Central Saskatchewan and if we had the same rain that far North, roads could have been treacherous. ”

Once at the lake, which is shaped more like a trailing globule of drool than a water feature, they’d cross the water in a rented boat to the island—the site of the cache. Rain, fog, and wind were of primary concern on this stretch of the journey.

Of course, these things don’t usually go as planned.

Team BOSS had, “perfect weather, perfect roads, and a perfect landing.” And the benchmark itself? It was “a fairly quick find.”

The real challenge came when the team was forced to wait to return to an area with cell service before making the phone call to KenJamin. The reward, however, was spectacular. “The phone call to the Cache Owner, KenJamin, for his required answers made our day as we knew we’d catch him off-guard and he would be stunned.”

And he was. “I vividly remember receiving the call from Team BOSS.  I think olemaz said the digits from the benchmark followed by the key digit, and words to the effect of ‘does that mean anything to you?’  I admit I was stunned and didn’t make the connection at first.  I paused and thought; then it suddenly stuck me and I blurted out ‘No Way!'”

Not quite. Despite this, olemaz says there was great deal of excitement and adventure for sure. “The best moment of the trip was seeing the beauty of nature in this world and the camaraderie among geocaching friends having fun.”

What’s next for Team BOSS?

Among other things on a long, long bucket list…

“As I reflect on this, the first cache in the series, I recall and appreciate all the great logs and pictures I have received as a result.  The three caches and the cachers that have visited them have made the distance, hikes and effort to place them repaid ten fold. As far as my future geocaching adventures go I have ambitions for areas in and around Arches and Grand Canyon National Parks.  Cache recommendations would be appreciated.”

Improvements to search filters on Geocac...

Could you be a better hider?

Follow Us
🧩Calling all puzzlers!🧩 Could you crack thi

Sometimes, looks can be deceiving…🥸 Have you

💪 You’ve heard of wind-powered energy, what a

🦉This geocache is a hoot!🦉 Have you spotted

Choo Choo! 🚂 You won’t need to buy a boardin