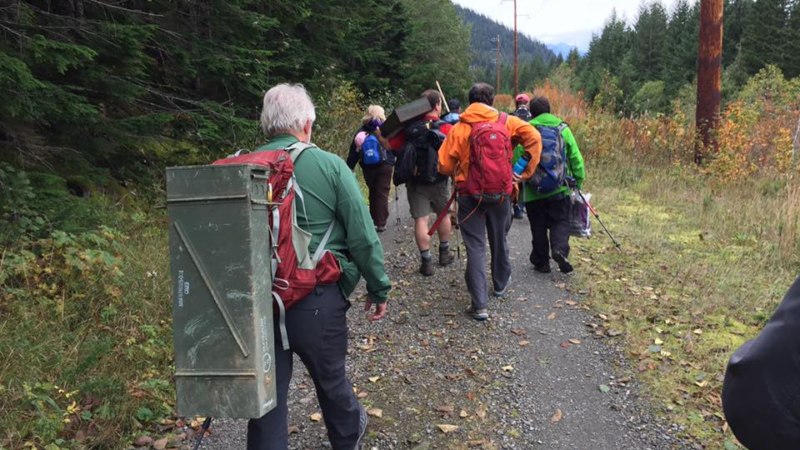 A group of Seattle-area geocachers has claimed a historic victory against muggle forces by rescuing an APE cache more than five years after it went missing!

In 2001, fourteen geocaches were placed in conjunction with 20th Century Fox to support the movie Planet of the Apes. Each geocache represented a fictional story in which scientists revealed an Alternative Primate Evolution (A.P.E.). These geocaches were made using specially marked ammo containers and contained an original prop from the movie. Mission 9: Tunnel of Light was one of those caches.

Located about 60 miles east of Seattle, the container was placed by Geocaching HQ co-founder Jeremy and the father of the geocoin, Moun10Bike. The cache was found more than 3,000 times, surviving minor disturbances over nearly 10 years. There is even a Mega-Event (Going Ape) created by the Washington State Geocaching Association to honor this famous cache.

Sadly, Mission 9 was muggled and then archived in June 2011. Moun10Bike wrote at the time, “The decision to archive was not taken lightly, and was not easy for either me or for Groundspeak. However, the rule with Project APE caches has always been that once the container goes missing (which is part of the identity of the original series of caches), then it is no longer an APE cache, and thus must be archived (or at least have its APE status removed).”

While the community mourned the loss, a tribute cache was placed and the Going Ape event continued each year. But thanks to the incredible efforts of dedicated cachers, there is a new chapter in this APE cache’s story.

The Search and Rescue

In April of this year, cachers Winos_Seattle and rambudo met up with Geocaching HQ co-founder Bryan Roth. As they chatted, the subject of the lost APE cache came up. Winos_Seattle wondered if the container could possibly be found. Over the years, some have speculated that it’s unlikely that whoever muggled the heavy container would have carried it nearly two miles back to the nearest parking area. Perhaps they simply removed it from its location and discarded it nearby?

But even if that were the case, the area is hilly and densely forested. A rescue effort would require detailed planning and keen eyes. Sounds like a job for geocachers!

With encouragement from Bryan and Moun10Bike, and after months of planning, the search commenced on October 1. The group of 10 included Winos_Seattle and rambudo, as well as other Seattle-area cachers Sproutter, Lamoracke, _Shaddow_, DSVaughn, Curious Joe, gsbarnes, KnightWolf74 and Princess Trouble.

After hiking to the tribute cache, they split into three teams and spread out into the surrounding forest. Equipped with two-way radios, each team was assigned to one of three zones. Within minutes, one team had located what turned out to be muggled tribute cache containers. The other teams found a variety of swag and logbooks, including ones with signatures from 2011 and 2014 (likely from the tribute cache).

Following an extensive and courageous effort, a joyous call eventually came over the radio, “We think we found the original container!” Down in the woods below the original cache location, behind a tree with the open end of the container facing down, was the Mission 9: Tunnel of Light cache. Distinguished by stickers affixed to the inside, as well as some Planet of the Apes trading cards, the cache had fared remarkably well over the years.

After a lot of celebratory high-fives, the group phoned Moun10Bike, who was shocked and delighted by the discovery. A couple days later, Moun10Bike, Bryan, and others at Geocaching HQ welcomed the triumphant searchers and the long-lost APE cache. And now that the container is recovered, we’re left with an important question.

The Planet of the Apes caches enjoy a special place in geocaching lore. Today, only one active APE cache remains: Brazil’s Mission 4: Southern Bowl. Given how the global geocaching community treasures the APE cache series, we feel it’s very important to hear what you think should happen next.

Should Mission 9: Tunnel of Light be returned to its original location and reactivated? Should it be kept safe from muggles and instead be displayed at Geocaching HQ as an artifact of the game’s history? Are there other ideas that should be considered?

We encourage you to make your voice heard by completing this survey by November 27, 2016. (Note: The survey is now closed, so we’ve removed the link from the blog) We’ll gather the ideas and later give you a chance to vote for your favorite in early 2017.

In the meantime, please join us in reveling in the knowledge that what once was lost has now been found. Congratulations and thank you to everyone who made it happen!

Improvements to search filters on Geocac...

Could you be a better hider?

Follow Us
💪 You’ve heard of wind-powered energy, what a

🦉This geocache is a hoot!🦉 Have you spotted

Choo Choo! 🚂 You won’t need to buy a boardin

🪡A true needle in the haystack🌾 Is this the

Geocaching and @zmangames_ are teaming up to celeb

🧠We love a good brainteaser geocache and this o