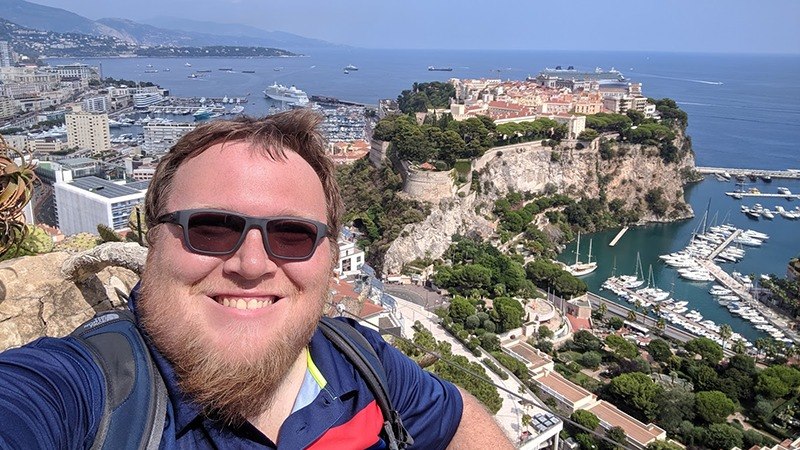 When NASA’s Mars 2020 Perseverance Rover launched last July, it included a tracking code that you’ll soon be able to log. With the rover scheduled to land in Jezero Crater on Mars on February 18, 2021, we wanted to learn more about the first-ever interplanetary trackable. Longtime geocacher Dr. Francis McCubbin (mikbalt) is a member of NASA’s Mars 2020 SHERLOC instrument team who played a big role in this exciting geocaching milestone!

HQ: How did you get involved with geocaching?

Dr. McCubbin: I was first introduced to geocaching on November 22, 2006 by my best friend and fellow cacher Dr. Alex Smirnov (asmirnov). After learning that there were things hidden everywhere, many in plain sight that could be found by anyone in the know, I was totally hooked. My favorite caches are in new places where I have yet to travel and, for me, geocaching is a way of recording my travels. It is also a great way of planning where I want to go next because geocaching takes you to a lot of rewarding places that are off the beaten path. As far as cache types, I am quite fond of EarthCaches, but I also really enjoy challenge caches, or at least working to qualify for them. I will also never pass up a Webcam Cache.

HQ: Could you describe your position at NASA?

Dr. McCubbin: I serve two roles at NASA; I am a research scientist, working in the field of planetary science, and I also serve as NASA’s astromaterials curator. As the curator, I am responsible for all extraterrestrial material samples that NASA has collected and brought back to Earth over the years. The samples are curated at NASA’s Johnson Space Center (JSC) in Houston, Texas. These materials include lunar samples from the Apollo missions to the Moon in the late 1960s and early 1970s, samples of solar wind returned from the Genesis mission, particles captured from the tail of comet Wild-2 from the Stardust mission, and today we are preparing for the arrival of material from the carbonaceous asteroid Bennu, which were collected by the OSIRIS-REx spacecraft on October 20, 2020. The Bennu samples will arrive on Earth on September 24, 2023. We also curate astromaterials that have been collected on Earth, including meteorites from Antarctica and cosmic dust particles that rain in from the cosmos and are collected in mid-fall by collectors on aircraft in the Earth’s stratosphere.

HQ: Tell us about how the trackable code ended up on the Perseverance rover.

Dr. McCubbin: Before I get into the backstory of the trackable code, I want to share a bit about the Mars 2020 mission and the Perseverance rover. The Mars 2020 mission marks the first leg of a Mars Sample Return campaign that will encompass three separate space missions with the ultimate goal of bringing samples of Mars back to Earth in the early 2030s. We have done sample return missions before, but this is the first where various parts of the sample return occur over a series of missions. The first mission commenced with the successful launch of the Perseverance rover on July 30, 2020. Perseverance is tasked with drilling out the samples, storing them in tubes, and then caching the tubes on the Martian surface for a subsequent “fetch” rover to find and retrieve. When I heard this plan, my first thought was, “The rovers are geocaching on Mars!” I say this to make the point that it was only natural for there to be a link between the Perseverance rover and the wonderful world of geocaching.

Back to the backstory…

This whole thing started when my fellow JSC colleague Dr. Marc Fries and his son, Wyatt, thought it would be cool to send a geocache to Mars like the one on the International Space Station (GC1BE91). Marc and Wyatt have dabbled in geocaching and they thought this would be a fun way to engage the general public about the Mars 2020 mission and the science that the Perseverance rover would conduct on the Martian surface.

Marc is a co-investigator on the SHERLOC instrument—a scientific instrument onboard the Perseverance rover. He floated the idea to mission management, and they agreed it would be a fun way to engage the public about their sample-caching rover. At that point, Marc wanted to bring someone into the project who had more geocaching knowledge and could speak the language, so he asked me to join the project. I was made a collaborator on the SHERLOC instrument team in 2016.

I was not quite sure where to begin, but I suspected that a physical cache on the rover was probably not ideal, given that no one would be able to find or log the cache, at least in the near future. I suggested that we either put a trackable code on the rover and/or create an EarthCache on Mars associated with the rover, given that the rover is essentially a robotic geologist. Marc handed me the metaphorical baton to address everything associated with the geocaching element of this project.

I had already planned to attend the annual International EarthCache Event (5IEE) in September of 2016, which coincided with the annual meeting of the Geological Society of America. I planned to find Matt Dawson of the GSA and tell him that NASA was interested in adding a geocaching element to the Perseverance rover. I knew that an EarthCache (or MarsCache?) would likely not comply with current EarthCache guidelines, but I figured Matt was probably the best person to ask. We had a great conversation. He was very interested in hearing more about the sample-caching rover, and he put us in touch with Geocaching HQ to start discussions and plan how best to incorporate an element of geocaching on the Perseverance rover. Liaising between the SHERLOC team and Geocaching HQ on this project has been a blast, and it is so rewarding to see geocaching going interplanetary!

HQ: What specifications were met for the trackable to be included on the rover?

Dr. McCubbin: Every piece of spacecraft hardware has a long list of requirements and specifications to which it needs to be built and that must be met before it can be integrated into the broader rover system. At JSC, we were tasked with building the calibration target that would be used by the SHERLOC instrument and its companion camera WATSON. Every item that we included in the calibration target served a purpose to calibrate the SHERLOC instrument and/or the WATSON imager. However, we designed a lot of the materials on the calibration target to serve multiple purposes. The trackable code is found on a polycarbonate disc that serves as an optical target for the WATSON imager and a spectroscopic standard for the SHERLOC instrument. The polycarbonate disc is actually a sample of astronaut helmet-visor material that we will use to monitor how this material responds to the Martian environment – a useful experiment for NASA’s future ambitions of someday sending humans to Mars. In addition to meeting contamination control and engineering requirements, the items were also approved by the mission leads at NASA’s Jet Propulsion Laboratory (JPL), NASA Public Affairs, and NASA HQ.

HQ: Is there anything special besides the trackable code that geocachers should watch for?

Dr. McCubbin: I am going to dance around the answer to this one a little and just say that the trackable code is not the only fun thing to decipher on the calibration target, and there MAY be more fun to come if we “can.” Another notable item on the calibration target is a small piece of Martian meteorite that will be used as a spectroscopic standard for SHERLOC. (Yes, we do have some samples of Mars on Earth already that were delivered as meteorites). The inclusion of a Martian meteorite on the Perseverance rover is particularly fun because the meteorite will have completed a round trip between Mars and Earth when Perseverance lands in Jezero Crater on February 18, 2021.

HQ: As a geocacher and scientist, could you describe why this project is so exciting?

Dr. McCubbin: Mars sample return has been a high scientific priority for decades, and the fact that we are finally implementing a plan to complete it is immensely exciting from a scientific perspective. These samples are going to tell us so much about Mars, its past, and possibly whether Mars ever harbored life. When I learned that the strategy for collecting and returning samples included a rover that was going to cache samples on the surface for another rover to find, the geocacher in me was stirred with childlike glee that the rovers would be doing something that resembles geocaching on Mars.

Being asked to actually help incorporate an element of geocaching on the Perseverance rover and getting to work with Geocaching HQ as a NASA scientist is exciting beyond what words can express. I can hardly wait for those first images of the calibration target from the WATSON imager to be sent back to Earth so we can see the word “geocaching” on something that is literally sitting on the surface of Mars. Geocaching has officially expanded its impact beyond the orbit of the global positioning satellites from which it emerged.